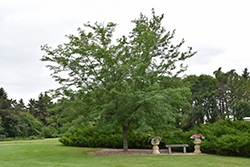 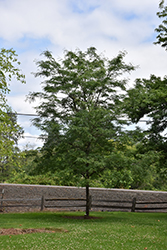 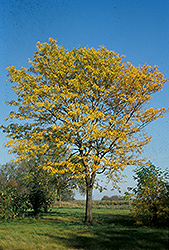 Proving to be one of the hardiest of all the honeylocust selections, with a broadly upright form and fine, almost lacy dark green foliage that turns yellow in fall; adaptable and surprisingly drought resistant, casts a filtered shade

Northern Acclaim Honeylocust has forest green foliage throughout the season. The bipinnately compound leaves turn an outstanding yellow in the fall. Neither the flowers nor the fruit are ornamentally significant.

Northern Acclaim Honeylocust is an open deciduous tree with a stunning habit of growth which features almost oriental horizontally-tiered branches. It lends an extremely fine and delicate texture to the landscape composition which can make it a great accent feature on this basis alone.

This is a relatively low maintenance tree, and is best pruned in late winter once the threat of extreme cold has passed. Deer don't particularly care for this plant and will usually leave it alone in favor of tastier treats. It has no significant negative characteristics.

Northern Acclaim Honeylocust is recommended for the following landscape applications;

Northern Acclaim Honeylocust will grow to be about 40 feet tall at maturity, with a spread of 30 feet. It has a high canopy with a typical clearance of 7 feet from the ground, and should not be planted underneath power lines. As it matures, the lower branches of this tree can be strategically removed to create a high enough canopy to support unobstructed human traffic underneath. It grows at a fast rate, and under ideal conditions can be expected to live for 70 years or more.

This tree should only be grown in full sunlight. It is very adaptable to both dry and moist locations, and should do just fine under average home landscape conditions. It is not particular as to soil type or pH, and is able to handle environmental salt. It is highly tolerant of urban pollution and will even thrive in inner city environments. This is a selection of a native North American species.